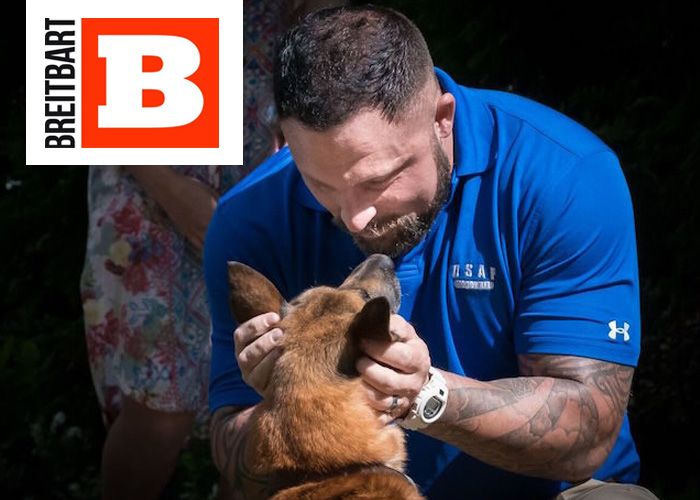 Sgt. Wylie and the female Belgian Malinois dog served for two years (2012-2014) at the Osan Air Base in South Korea.

The two military comrades — Sgt. Wylie and Emra — recently reunited in Cincinnati, OH, courtesy of the American Humane group, the Crown Media Family Networks, and individual donors across the country.

“Emra and I had such a strong bond in South Korea, but I will admit, my biggest fear was that she would not recognize me,” the soon to retire, 13-year Air Force veteran, who has also served in Iran and Afghanistan, told Breitbart News. “It had been nearly three years since we were together at Osan Air Base.”

“As Emra approached me for the first time since Osan, she was so distracted by the cameras and all the equipment, that she hesitated for a moment to smell the lenses and microphones. For that split second, my heart dropped into my stomach,” he continued. “But then it happened! She looked right at me, nuzzled into my neck, and licked my face.”

“She had not forgotten the long shifts together posted out in the middle of nowhere or the endless hours training together,” added Emra’s former handler and trainer. “We are inseparable now, just like we were for our two years serving together. Emra never leaves my side and always has to keep eyes on me. She knows what I am feeling without even having to utter a word. Our bond is deep and we are very protective of one another.”

K-9 military teams were strategically deployed around the U.S. base in and around Pyeongtaek to serve as “listening posts” and deter incursions by North Korean enemy personnel, Breitbart News learned from the American Humane group.

The nine-year-old Belgian Malinois retired from the military due to old age. Wylie and Emra will be spending their retirement together.

In describing what he felt when he joined his pal after spending three years apart, the sergeant told Breitbart News, “Excited only describes the tip of the iceberg. Emra is home where she belongs — with my wife, daughter, and I.”

Referring to his family visiting him in South Korea, Sgt. Wylie added, “They knew Emra was there for me while I was stationed so far away from home so they spent every moment they could bathing, feeding, and playing with her while Emra wasn’t working and watching us train whenever they could. I am so proud of Emra and she means the world to me — to all of us. We all now feel complete.”

Sgt. Wylie will end his 13-year enlistment in the Air Force in May and start a new career at the U.S. State Department as a K-9 handler and security specialist.

“American Humane is honored to reunite two American military heroes and best friends today. Bringing Emra home to retire on U.S. soil is the very least all of us as Americans can do to express our gratitude for her extraordinary service and sacrifices on behalf of our nation,” declared Dr. Robin Ganzert, president and CEO of American Humane, in a statement.

In collaboration with the Crown Media Family Networks and individual donors throughout the United States, American Humane funded the cost of bringing Emra from South Korea back to the United States.

“Sgt. Wylie and Emra are the 32nd military team to be reunited by American Humane,” the organization noted. “American Humane is also providing lifetime veterinary care for Emra.”

“American Humane has worked to support the U.S. military for a century: American Humane’s animal rescue program was born on the battlefields of World War I Europe, where, at the request of the U.S. Secretary of War, volunteers with American Humane deployed to rescue and care for 68,000 wounded war horses each month,” the statement added, noting that the organization continues to honor its legacy.