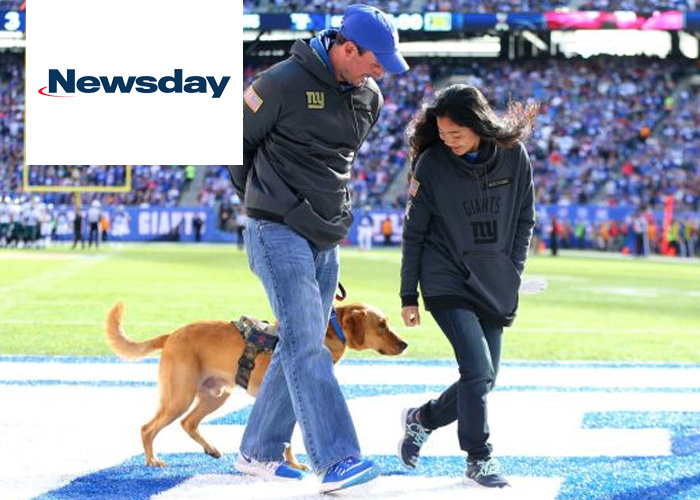 Steve DeVries stepped out onto the field at MetLife Stadium after the first quarter of the Giants game Sunday to the applause of thousands of fans. DeVries, originally from East Meadow, thought he was just going to be recognized for his service as an Army combat medic in Iraq.

The lifelong Giants fan did not expect to also receive a life-changing gift — a 3-year-old service dog named Levi.

DeVries, 38, served in Baqubah, Iraq, from 2006 through 2008. Throughout his deployment, he said he survived several blasts from improvised explosive devices, including one that detonated directly under his tank — compressing his spine and knocking DeVries out cold.

Due to his injuries, DeVries, who now lives in Herndon, Virgnia, medically retired in 2013. He now suffers from post-traumatic stress disorder and traumatic brain injury, which has affected his mood and memory, he said.

“The PTSD has left me with very bad anxiety. It’s kept me from going out and doing things, and has really affected my family a lot,” said DeVries, whose wife is expecting a baby boy, Hunter, in about three weeks. “I think the service dog will really give me the confidence that I feel like I sometimes don’t have now. I hope he’ll help me be a better husband to my wife and a better father to my kids.”

The yellow Labrador bounded out to meet DeVries and his stepdaughter, Callista, 12, for the first time Sunday in the end zone. The dog, which is specially trained to work with veterans who have PTSD, was presented to DeVries by national nonprofit, American Humane; Semper K9, an organization that pairs service dogs with veterans; and the United War Veterans Council.

“We’re thrilled and honored to have the opportunity to put a healing leash in the hands of a military veteran,” said American Humane president and chief executive Robin Ganzert. “It’s a privilege to recognize the incredible service and sacrifice of Mr. DeVries with this special gift.”

“I just thought it was a huge honor, as a big Giants fan, to be out on the field., That was good enough for me,” DeVries said. “But to get a service dog, too. That was just amazing, and I’m just so grateful.”