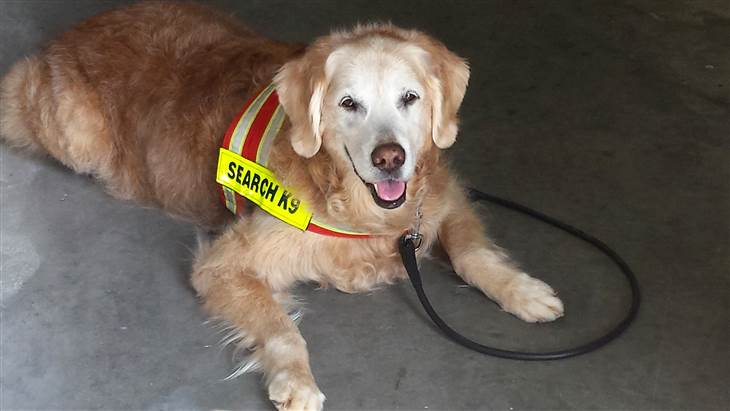 This one has feathery fur, a sunny smile, a calm nature and — for a dog — an uncanny ability to zero in on the people who need her most. She’s a 15-year-old golden retriever named Bretagne, and she’s one of the last surviving search dogs who worked at Ground Zero in New York City after the Sept. 11, 2001 terrorist attacks. (Another surviving 9/11 search dog named Woodie, a 15-year-old golden retriever, also worked at Ground Zero, and a 15-year-old English springer spaniel named Morgan worked at Staten Island.)

For the first time since the recovery efforts after the attack, Bretagne returned this week to the site of the former World Trade Center complex with her longtime handler and owner, Denise Corliss of Cypress, Texas. They were joined by NBC News’ Tom Brokaw, who told their story on TODAY on Thursday morning, Sept. 11.

Corliss fought back tears as she gazed at the 9/11 Memorial’s enormous waterfalls and reflecting pools, which are surrounded by bronze panels bearing the names of the nearly 3,000 people killed in the attacks.

“Seeing this kind of took my breath away a bit, similar to how the pile was the first time I saw it,” Corliss, 49, told TODAY.com. “It’s so calm and peaceful now, unlike the chaos of before.

Visit NBCNews.com for breaking news, world news, and news about the economy