The Hill | Zoos save species — visit one this World Wildlife Day 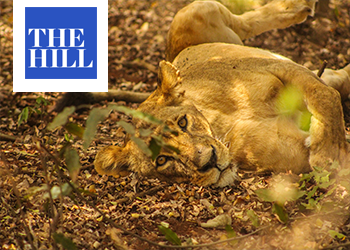 How many years do we have left to share the earth with tigers, leopards, and jaguars?

Today is UN World Wildlife Day, which raises awareness about the precarious existence of earth’s most impressive fauna. This year, the day is dedicated to big cats, perhaps the most revered predators in existence. But the tables have turned on these powerful predators who now face multiple threats, including habitat loss and poaching.

While the UN has coordinated activities across the globe to help showcase big cats’ plight, there is something more specific that lawmakers and all Americans can do right now to help these majestic creatures: support their local zoos and aquariums.

Zoos and aquariums help preserve endangered species in several ways. First, they are a sanctuary for animals under threat. They act as modern-day arks of hope. The aforementioned South China tiger, for instance, hasn’t been seen in the wild since the 1970s and likely only exists in zoos.

Second, zoos and aquariums offer an oasis for breeding. Several critically endangered species have increased their populations through zoo propagation programs. The Arabian Oryx, Whooping Crane, Black Footed Ferret, and California Condor have all seen their populations partially recover as a result of zoos’ efforts. Washington D.C.’s National Zoo helped increase the population of the Golden Lion Tamarins from about 200 to 3,200 today.

“The survival of many of the world’s species,” said the conservation group Species 360, “rel(ies) on their ability to reproduce in captivity — for some, zoo populations may be all we have left.”

Third, zoos and aquariums are among the major funders of conservation efforts, contributing to thousands of conservation projects each year. They also conduct major research efforts in breeding, habitat, and veterinary sciences in an effort to conserve species.

Finally, and most importantly, zoos provide people, especially impressionable children, with the opportunity to see these remarkable animals up close. People won’t protect what they don’t love, and they can’t love what they don’t know. No matter how closely programs like Planet Earth depict animals, nothing will match the bond of seeing them in real life. Just look at a child’s eyes at the zoo when he or she encounters a tiger or similarly majestic animal.

The University of Missouri has even found that zoos can reduce blood pressure and stress. This timeless human-animal bond can act as an antidote to today’s culture of anxiety, depression, and cynicism.

Some well-meaning animal activists are uncomfortable with animals in zoos, calling for animals to be returned to their natural habitat. But what this perspective overlooks is that for many animals, their current habitats — characterized by environmental degradation and poaching – are anything but natural. Zoos remain species’ best hope for survival.

With countless Americans concerned about the treatment of animals, it’s more important than ever to bring all institutions to the highest level of animal welfare — and shine a bright light on the facilities that are already upholding admirable standards of care. American Humane’s robust certification program, Humane Conservation, does just that. The program helps define, through rigorous science and evidence-based practices, the highest animal welfare and well-being standards for animals in human care.

This weekend, support World Wildlife Day by visiting a local zoo or aquarium. They offer the best hope of keeping big cats around to inspire generations to come.

Robin Ganzert is president and CEO of American Humane.