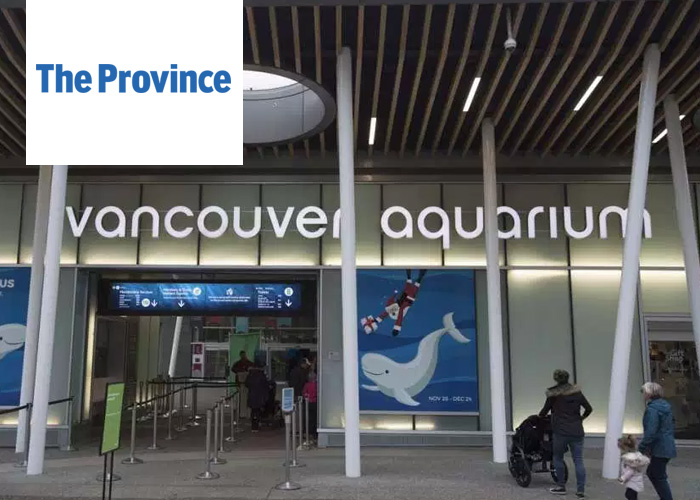 Canadians can feel proud knowing that the Vancouver Aquarium, one of the country’s most popular and beloved attractions, is leading crucial new efforts to protect wild beluga whales at a time when these magnificent mammals are more vulnerable than ever.

Our planet is currently in the midst of what scientists call the Sixth Extinction, the worst species die-off since the loss of the dinosaurs 65 million years ago. Unlike the five preceding waves of mass extinction precipitated by natural events, the current extinction crisis is primarily the result of human activity, threatening to wipe out entire species of animals.

Beluga whales are no exception, with the dwindling population in the St. Lawrence Estuary. Various man-made pressures — including pollution, reduced food supply, disturbance by humans and habitat degradation — have decimated the region’s whale population, now down to about 800 individuals. That is less than seven per cent of what it was before 1885. This number continues to drop at a rate of roughly eight per cent a year.

Recognizing the urgency of the crisis, six months ago the federal government upgraded the official status of beluga whales in the St. Lawrence Estuary from “threatened” to “endangered.”

For more than four decades, the aquarium has worked to protect this vulnerable species through scientific research and public education. On Monday, the aquarium pledged to further expand these vital conservation efforts, announcing the launch of an ambitious 12-year beluga conservation project. The initiative aims to significantly expand the limited body of scientific knowledge about the beluga to inform current conservation work in the field.

For example, the aquarium, in collaboration with scientific partners at the University of B.C., and Fisheries and Oceans Canada, is conducting new research on the effects of sounds on belugas. Together, the groups are working to collect underwater acoustic data to enhance our knowledge of the impacts of noise on marine mammals and determine how scientists can more effectively mitigate these impacts.

The aquarium’s revitalized and expanded commitment to research will also translate into an educational emphasis on scientific exploration. As part of the new program, the 1.18 million annual visitors to the aquarium will notice an expanded focus on research in interpretive shows and other engagement activities. The aquarium also plans to feature information about the threats facing beluga whales in the wild more prominently.

Of course, the positive contributions of the aquarium in conserving the vulnerable beluga whale can’t — and shouldn’t — outweigh the health and well-being of the marine wildlife living under the institution’s care. But Canadians can be assured that the aquarium upholds the highest standards of animal welfare. It was among the first elite institutions to earn inaugural certification for animal welfare under the American Humane Conservation program launched last year.

This global, third-party certification upholds rigorous, evidence-based standards for humane animal care. To earn certification, the aquarium passed a comprehensive, independent audit of its facilities and practices. The evaluation verified many dimensions of animal welfare, including excellent animal health and housing; positive social interactions within groups of animals, as well as between animals and handlers; and safe and stimulating living environments.

The aquarium continues to elevate and expand its commitment to animal welfare. The new initiatives announced this week, for instance, include plans to significantly enlarge the current cetacean habitats. These new environments will be designed to accommodate the unique lifestyle of beluga whales and the needs of scientific researchers who will study them. The facility is developing stimulating, state-of-the-art marine environments that will feature wide shallows for rubbing and socializing, varied topography, deeper water and interesting areas to explore.

While millions of Canadians are familiar with the excitement and education offered at the Vancouver Aquarium, visitors can now enjoy its awe-inspiring exhibits with the peace-of-mind that the animals living there receive the highest standards of humane, verifiable and transparent welfare. As a humane leader in marine research and conservation, the aquarium is improving the lives of marine animals in both human care and in the wild — something that all of Canada’s residents, whether living on land or underwater, should support.