We must ensure equal access for veterans and their service dogs 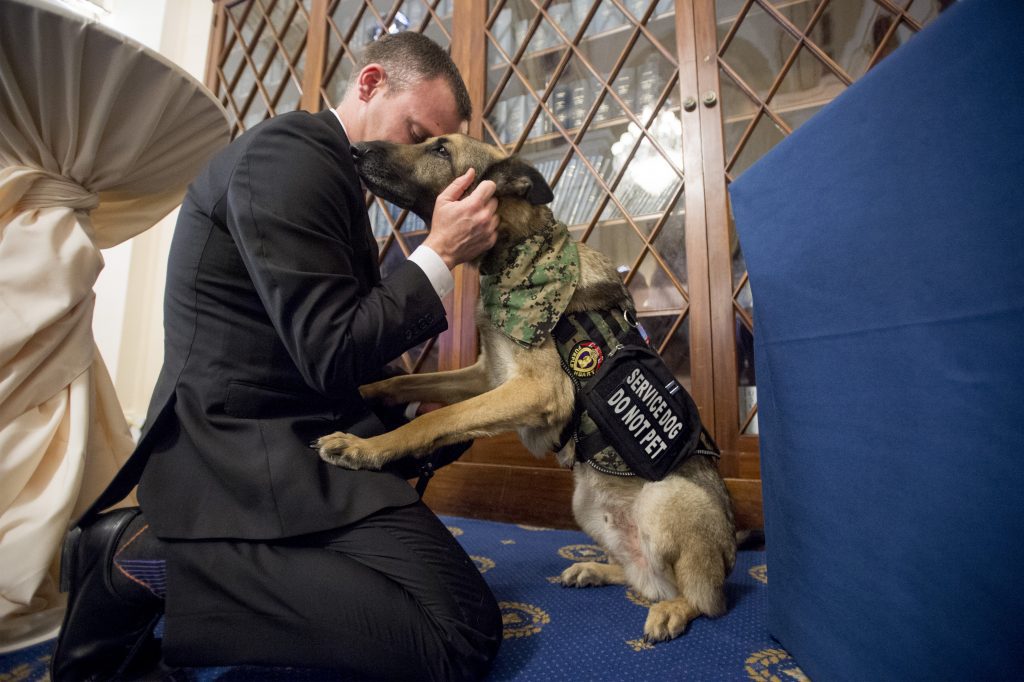 A U.S. Navy veteran recently reported that she was denied entry to an Atlanta restaurant with her post-traumatic stress (PTS) service dog, allegedly due to the manager’s claims that she didn’t “look disabled enough” to require an assistance animal. Unfortunately, while they don’t always make the news, stories like this one are all too familiar, with our nation’s veterans and their specially trained PTS service dogs facing regular scrutiny and illegal discrimination in commercial venues across the country.

The Americans with Disabilities Act (ADA) requires businesses that serve the public to allow people with disabilities to bring their service dogs into all areas where customers are normally permitted. The law allows employees to ask customers only two questions: first, if the dog is required because of a disability; second, what work or tasks the dog is trained to perform. However, despite the federal protections in place to ensure access for disabled customers with service animals, veterans are often still denied entry or refused service because of their PTS service dog, while also facing illegal lines of questioning from employees.

American Humane commissioned a new survey of retail employees to discern the potential causes contributing to these egregious acts of discrimination against veterans and their PTS service dogs in public spaces. Perhaps the most striking discovery is the pervasive lack of employee education on the federal laws regarding service dogs. Close to seven in 10 respondents (69 percent) in the national sample said they never received training from their employer on the questions they are legally allowed to ask customers to confirm their dog is a service animal. Case in the point, the restaurant manager who turned away our Atlanta veteran said she did so in part because she “misunderstood the law,” according to a local news report.

The survey also found that employees don’t always take customers with service dogs at face value. Over one-third (35 percent) of respondents suspected at least one customer in the last year of misrepresenting their dog as a service animal. Most (56 percent) identified the visibility or obviousness or of a person’s disability as a factor in their perception of the legitimacy of a service dog, a bias suggesting that PTS veterans are particularly vulnerable to suspicion.

To address these concerning perceptions and patterns of behavior, leaders in the business community should swiftly incorporate explicit protocols regarding customers with service dogs—including those used for PTS and other invisible wounds—into employee training. Continued public education campaigns to advance awareness of PTS service dogs as credible and effective treatment methods are also good places to start. But the best solution to the ongoing discrimination against our country’s wounded veterans is the creation of national standards for the definition and identification of their service animals.

Currently, there is no federally recognized certification for PTS service dogs, making it even more difficult for veterans to refute subjective challenges from dubious employees who question the credibility of their disabilities or their service animals. American Humane hosted a convening of professionals on Wednesday in Washington, sponsored by the nonprofit Schultz Family Foundation and pet nutrition and healthcare business, Mars Petcare, to address this unacceptable void.

The meeting, attended by leaders with diverse backgrounds—including service dog training, government affairs, veteran advocacy, mental health services, and the transportation restaurant industries, among others—will define an ambitious, but actionable, plan to develop rigorous standards for PTS service dogs. These new guidelines will provide veterans with one accepted form of national service dog credentials, offering much-needed clarity, credibility, and consistency, to the benefit of PTS veterans and customer-facing employees alike. The standards will also legitimize and elevate PTS service dogs in the eyes of an American public still skeptical and ill-informed about their use.

In the meantime, we can all support our country’s veterans in small, but meaningful, ways: first, showing respect for working service dogs, which means always refraining from petting, rudely staring, or taking pictures; second, stepping up and speaking out if you witness discrimination against a veteran and their service dog.

And finally, remembering that’s incumbent upon all of us to help protect the dignity and equal treatment of our wounded veterans and the service dogs who support them—it’s the very least we, as American patriots and fellow citizens, can do.

Read more on The Hill